PURCHASE THE EDUCATIONAL DVD OF THE CAMPAIGN

THE CAMPAIGN follows the people behind California’s historic No-on-8 campaign to defend same-sex marriage through exclusive behind the scenes footage, interwoven with the national history of same-sex relationship recognition since the 1950s. The story follows five activists — Alison, Holli, Richard, Anne and Claudia — as they labor tirelessly to defeat Proposition 8, sacrificing time with the families they are fighting to protect. The film positions their efforts within the context of shifting legal and political landscapes, from Anita Bryant’s “Save our Children,” to Pat Buchanan’s declaration of a “culture war,” and finally to the wave of marriage bans that swept 41 states across the nation. The passage of Prop 8 changed the political landscape forever, both for the US LGBT equality movement and for the individual activists who threw themselves into the largest social issue campaign the US has ever seen.

Featuring music from the Kronos Quartet and Jacob Garchik, THE CAMPAIGN emerges as a critical installment US social history, ultimately providing a window into a timeless question: What inspires everyday people to opt in for something bigger than themselves?

The film is especially relevant in these areas of study: 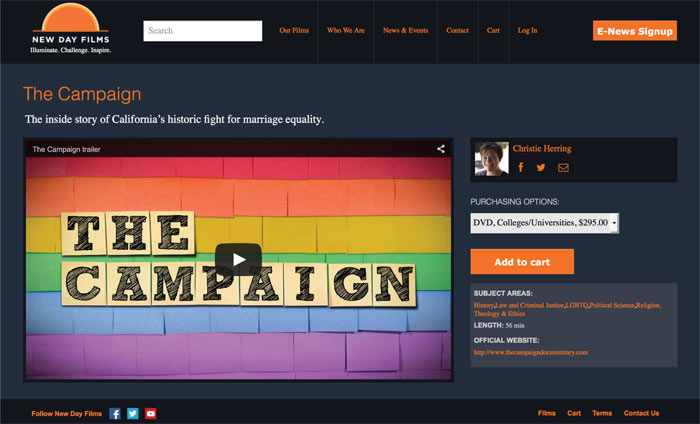 You can BUY or RENT a copy of THE CAMPAIGN for your institution through NEW DAY FILMS. If you have questions about the DVD, hosting a community screening, or purchasing the film for private use, please email us.

PRAISE FOR THE CAMPAIGN

“Equally poignant and inspiring, The Campaign offers fascinating insight into a pivotal moment in contemporary LGBTQ history. Its lucid attention to the personal stakes within political struggle makes it an indispensable resource for stimulating informed, thoughtful discussion. A complex, engaging, and deeply important film.”

“Brings a critical political moment in US history to life … perfect for the university classroom.”

“This film not only captures an important moment in history – though it does that exceedingly well – it also provides insight into perennial themes of optimism, disappointment, family, community, and perseverance.”

“Honest and compassionate, this film is essential viewing for students of LGBT history and American politics, as well as for faith and community groups who seek to understand how defeats are survived and movements are made.”

Joanna Brooks, Author of Book of Mormon Girl and
Professor and Assoc. Dean of Graduate and Research
Affairs at San Diego State University